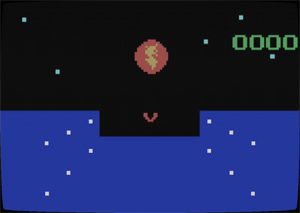 The newest game from Odyssey Brasil is out! Trench Runner (Portuguese title: Corredor Estelar) is the debut game for Odyssey Brasil from Jason Gohlke, who longtime readers may recognize as the creator of the first Odyssey² Cartridge Reader. Jason's new game is inspired by Star Strike on the Intellivision, which in turn was inspired by the famous Death Star trench scene from Star Wars – so it has a classic lineage. Trench Runner even comes with a custom keyboard overlay! Learn all about Trench Runner on the official web page.

Odyssey Brasil's Vault section, which allows you to play emulated Odyssey games directly in your browser, now features two exclusive homebrew titles: Copa 82 (Cup '82) and Salve os Humanos! (Save the Humans!). Check out these and other Vault games, and participate in the Challenge of the Month to get your name on the leaderboards!

Ed Averett, who all Odyssey fans know as the programmer behind many Odyssey² games and creator of KC Munchkin, has published a new game starring our favorite blue munchkin! KC Returns II follows up on KC's previous adventure, where our hero once again does battle against a real-world biological enemy: this time, the COVID virus. As in the first Returns, KC has entered a microscopic world, where he helps the human body's Adaptive Immune System fight off invading viral molecules. This time around, the membranes that define the playfield form a more maze-like structure than before, which is a natural fit for KC. The game is meant to be fun of course, but has a larger purpose: to teach about the immune system and help players visualize the mechanics of disease and how to counteract it. Ad Ed and KC say, "If you can see it, you can solve it!"

Old-school Odyssey fans will be interested in the game for another reason: a port of the original K.C.'s Krazy Chase is included as an Easter egg! This marks the first time an Odyssey² game has received an official port to a different system (in the U.S. anyway) – and by the original creator, no less! This is indeed a port, not an emulation; Ed worked to build a faithful PC recreation of the original game, but did make some minor tweaks to improve the experience when played with a touchscreen. He even consulted with Odyssey fans (including yours truly – it was an honor) to ensure accuracy to the original. Even better... he promises there will be more Odyssey² ports to come! Although Ed's always more interested in looking forward than revisiting the past, he does want to preserve the video game history he was such an instrumental part of. Check out the Odyssey Legacy portion of kcmunchkin.com for more info!

Odyssey (and Videopac) Hit By SANDSTORM!

You are Josué Jorge and you have time traveled to the ancient world of Egypt in search of the Crowns of Power. They are hidden inside the labyrintihne and macabre Great Pyramids and guarded by powerful deities. Now, our hero must face unexpected dangers such as giant spiders, poisonous snakes and, if that's not enough, time itself, because if the countdown reaches zero, he will be forever stuck in the past...

SandStorm is available in two editions: the Brazilian "Odyssey" style and Videopac-style. The Brazilian release Tempêstade de Areia is in Portuguese but there will be an English language guide available. It can be purchased on Experiência Odyssey, and may also be available on eBay (search "Tempestade de Areia"). Also, a limited run of 25 Videopac cartridges is being released by Videopac Is @live. These can be purchased on the Odyssey.nl Forums. Both cartridge versions will function on American Odyssey² consoles, but since the Brazilian version is NTSC it will have more accurate colors.

A playable demo of the game can be found here.

Also, to celebrate the new adventure of Josué Jorge, Odyssey Brasil is launching the Brazilian version of Wildlife: Vida Selvagem! More information (in English), plus a playable demo, can be found here.

I'm very late with this news, but it's been difficult to find the time for regular site updates lately. I'm adjusting some things in my everyday schedule however, and hope to find more time for the site before long. But enough about me!

Back in April, the II Basque Tournament of Videopac G7000 was held in Bilbao, Spain. It marked the third such Videopac contest held in Basque Country since they started last year. It's involved a tiny group of participants so far but it's always encouraging to hear about a regular Odyssey²/Videopac event, no matter how small it is. Read about it and view the scoreboard here. Thanks as always to Egoitz Campo for the update!

Extra! Read All About It!

Hot off the presses! I'm pleased to announce a brand new area of the site: the Odyssey² Newspaper Archives, an index of O2 content that you might have seen in your daily paper decades ago. Although the Internet hasn't fully killed off the medium yet, newspapers are nowhere near the media powerhouses they once were. Back in the Odyssey²'s heyday, the daily paper was a major source of information and news for people across the world. Dig through an archive of newsprint from the early '80s and you'll likely find advertisements, sales listings, and maybe even the occasional article about our favorite console. I've been combing through some online archives for a while and saving up digital clippings, which I've placed into a kind of scrapbook under the site's Library section. So grab a cup of coffee and your morning bagel and start reading!

The content currently in the Newspaper Archives only scratches the surface – I still have dozens of advertisements to add, and there are more online archives I've yet to sift through. I'm sure I'm not the only one doing this. If you have been saving newspaper clippings on your own that you'd like to share, please contact me.